One of my blog readers emailed me about this today, so I thought I'd pass it along.

The Los Angeles County has passed an ordinance to better protect animals.


"Under the new rules, breeders will be required to:

-- wait until dogs are at least 12 months old before breeding them;
-- keep puppies on premises until they are at least eight weeks old;
-- separate pregnant females at least three days before they give birth;
-- and provide nesting boxes for the moms and their pups."

From the NY Times, Forget the Treadmill. Get a Dog.


"If you’re looking for the latest in home exercise equipment, you may want to consider something with four legs and a wagging tail.

Several studies now show that dogs can be powerful motivators to get people moving. Not only are dog owners more likely to take regular walks, but new research shows that dog walkers are more active over all than people who don’t have dogs."

Personally, I think that it's not the dog that makes people more active, but rather that people who are more active like to have a dog. If you are not an active person, I don't think that you should get a dog. You might have good intentions on walking that dog, but over time, your true sedentary personality will prevail. And that dog just won't get the exercise he or she needs.

Many people here are trying to help those in Japan who were devastated by the earthquake last Friday. Of course we want to help the people there. Everyone does. But often overlooked are the pets. They are often separated from their families. They are often lost. They are hurt. They too are in need of help.

If you'd like to help the pets of Japan, I recommend donating to World Vets.
About World Vets, from their website:

World Vets is a non-government organization (NGO) providing veterinary aid around the globe in collaboration with animal advocacy groups, foreign governments, US and foreign military groups and veterinary professionals abroad. Our work spans 25 countries and 6 continents and addresses not only veterinary issues, but also human health issues impacted by zoonotic diseases in developing countries. World Vets is a 501c3 nonprofit organization.

Just for fun, Yun tied a balloon to Juju. 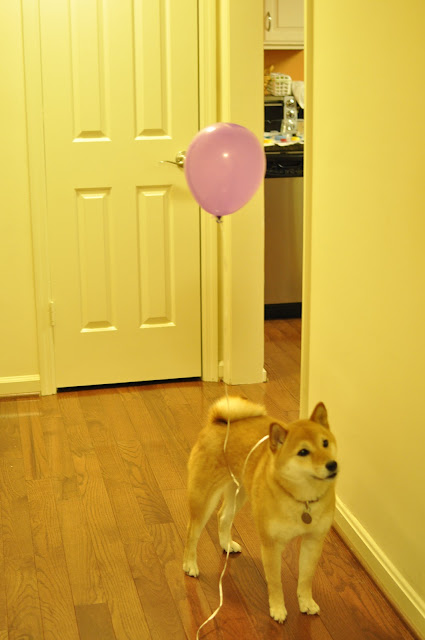 She didn't like it much and tried to run away from it. But she was unsuccessful. Yun had to remove it for her.

Then Yun tried to tie it around Loki. This he did successfully, but it didn't last. Loki ran downstairs to the basement, and ran around the couches until it came off on it own. He didn't need our help to get that darned thing off.
Posted by Vi at Tuesday, March 08, 2011 1 comment:

Everything is Juju's fault

In the world according to Loki, everything is Juju’s fault.

The other day, I accidentally nicked Loki’s paw while closing the back door. I felt really bad and said sorry to him, but he didn’t hear and/or didn’t understand me. Instead he went after Juju. He ran towards her barking up a storm. I was afraid that they were going to get into a fight, even though it’s been well over a year and a half since their last fight. Luckily, they have decided that barking/growling matches sufficiently announce their displeasure and they don’t get physical.

Then last night, we were watching TV. Loki sat on floor on the left side of the couch, and Juju was on the right side. All of a sudden, Loki lunged and ran over to Juju while barking ferociously. He did this a couple more times before we realized that it was a particular ding of a bell on TV that set Loki off.

Yes, Loki. Apparently anything and everything that might be wrong in this world is Juju’s fault.

Every time Loki goes after Juju, she always stands her ground and barks/growls back. She doesn’t go after in him return, but she doesn’t back down. I imagine her saying “What’s your problem?” to him. Poor girl, she gets blamed for everything.
Posted by Vi at Friday, March 04, 2011 3 comments: