Today was the start of a new routine. Because I think Loki and Jujube need more exercise and because I think that such exercise will help with some of their issues, I have decided on this new routine -- to wake up at 5am to walk them before work.

This morning, we make it around the neighborhood in about 20 minutes and I headed down towards the woodsy paved path behind our townhouse community. This is the beautiful path I use during the weekends; it leads to a large lake and park. It is a very popular path on the weekends, but this morning it is deserted. We start on this path, when lo and behold, I spot a fox. A real fox with a big bushy tail. Luckily, it is at a distance. I head back home. Maybe the woodsy path isn't such a good idea.
Posted by Vi at Monday, April 27, 2009 7 comments:

It just occurred to me. I don't think Loki has ever experienced a real thunderstorm. It doesn't thunderstorm in southern California, where Loki spent the first 1.5 years of his life.

It's just starting to thunder here on the east coast tonight, and Loki's barking at the thunder.

It thunders. He barks back.

Email ThisBlogThis!Share to TwitterShare to FacebookShare to Pinterest
Labels: socialization/handling

Dogs are creatures of habit

It’s April and we are still having problems with Jujube’s potty training. Rate is about one peeing accident a week. No pooping accidents. I’ve returned to my theory that it’s Jujube, and not Loki. Accidents usually occur on the front door mat. At least it is easy to clean and easy to discard of if necessary.

Our usual work day schedule:
6:45 am Breakfast for the dogs; Potty break immediately after breakfast (This is before I leave for work.)
9:30 am Potty break (This is before Yun leaves for work.)
6:30 pm Daily Walk, includes both exercise and potty break
7:30 pm Dinner for the dogs
8:00 pm Potty Break; And then two or three more potty breaks depending on how often Jujube whines at the door.
11:00 pm Last Potty Break

Things are good when we stick to this schedule. Dogs are creatures of habit. But our lives are not so rigid. Changes in work schedules or dining out break this daily pattern and dogs don’t understand.

Yesterday, Yun had to leave for work early, so the dogs only had one potty break in the morning right after breakfast. And since Yun had to leave so early, we hired a dog walker to come in the middle of the day. Unfortunately, she called and told me that there was an accident on the front door mat when she arrived at noon. Our guess is that Jujube went because she was used to going twice in the morning, and yesterday she only got to go once. So the dog walker rolled up the door mat and put it outside. I have yet to clean it; I’ve been so busy.

We also happened to have dinner plans yesterday evening. Knowing that Jujube seems to go like four times between 7:30 and 11pm, I was anticipating an accident. As a side note, I don’t know why she goes so often in the evenings. She can hold it fine during the day when we are gone at work, but she constantly whines at the door to be let outside in the evenings. Maybe she just likes to see how many times she can make me open and close the back door.

When we arrived home, lo and behold, no accident! Maybe this is because there was no door mat available for her to go on. I don’t know.

Potty training is frustrating. I don’t know if we are training her or if she is training us. Actually, I think she’s training us; I just don’t want to admit it. I want to say that potty training Loki was easier, but maybe that’s because everything looks rosier in retrospect.
Posted by Vi at Wednesday, April 22, 2009 9 comments:

Relaxing in the Living Room

Loki's new favorite spot is underneath the piano. 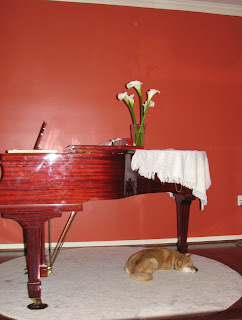 Here's Loki under the piano & Jujube is relaxing by the doorway. 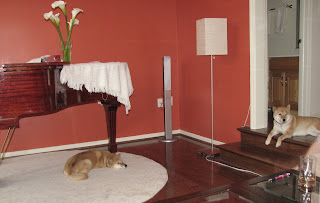 "Oh, Loki, are you sleeping again?" 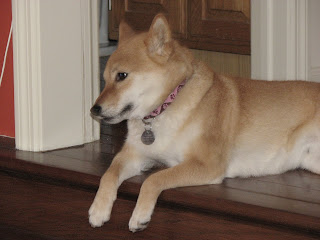 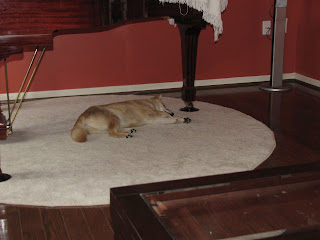 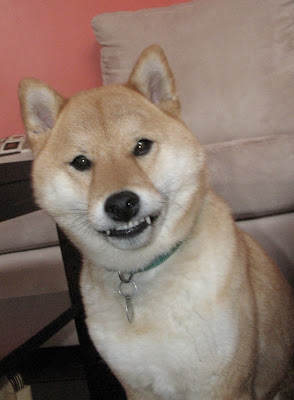 Here's a picture of Loki. He's not smiling. He might not be fully lifting his lips, but he's not happy. I've gotten pretty good about reading his body language. Sometimes I'm surprised when other people can't read a dog's body language. So here's an example of a somewhat subtle warning.
Posted by Vi at Saturday, April 11, 2009 6 comments:

We’ve had significantly more accidents since getting Jujube. Actually, during the first month or so of having her, there were not many accidents, but in this past month, the number of accidents has become intolerable.

With more than one dog, it’s hard to tell who had the accident. At first we always assumed the culprit was Jujube, because she was the new dog and Loki was very well potty trained before her arrival. But we think that some of the accidents may have been Loki’s fault. The key difference is that we now use the backyard for their potty breaks. Prior to Juju, we always took Loki on walks to go to the bathroom; he had refused the backyard. Jujube, on the other hand, does not usually go during walks; she much prefers to go in the backyard. When we first got her, Loki would go in the backyard because she did. Now, I think this novelty has worn off on him. He’s reverted to being very stubborn about not going in the backyard. He just sits there, looks out, and does not at all respond to the “pee-pee” command. So, it’s possible that the accidents are Loki’s fault. After all, he’s the one who refuses to go in the backyard, while we see her go in the backyard all the time. Sometimes, I wonder if he holds all of his pee to go once a day when I take them on their daily walk, which is primarily for exercise rather than bathroom purposes.

The accidents had an odd pattern to them. There were never ever any accidents while we were away at work. The 8 to 9 hour stretches of time were never a problem. Instead, the accidents almost always occurred when we were home or away for very short periods of time.

Since last Thursday, I’ve ramped up my vigilance, closely watching them at home and trying my best to block off areas. I’m using chairs, which are not foolproof, but I don’t want to spend the money on baby gates. I’m also diligently watching Loki so that I can treat him when he goes in the backyard. This is probably the most difficult task, because he refuses to go. You have to be very patient. Luckily, he did go this morning, so I was able to treat him. Yay!

Lesson learned: When you get a new dog, whether it be a puppy or adult, you should expect to do some potty training.

Jujube almost always stays close to us (like a real dog, not like our cat Loki). It's also relatively easy to get her to come to us. She's stays so close and comes so readily that I almost thought she might be a good off-leash candidate. (No, I was wrong. She has darted out of the door a couple times and made it down the street, paying no attention to our calls. By the way, this is another good way to get to know your neighbors.)

In contrast, Loki does not "come". It might have been the first command we taught him, but he sure acts like its not part of his vocabulary.

My new tactic of getting Loki to come is to command Jujube (who is always near) to sit. So far, this has been the most reliable way to get Loki to come -- I'm getting a 100% response rate! As soon as he hears me say, "Juju, sit," Loki perks up and immediately comes to us, sometimes huffing & puffing. If she gets praise, then Loki wants praise too. If she gets a treat, then Loki really, really wants a treat too. Without her presence, praise and treats might not get Loki to come. But with her presence, that same praise & same treat is just ten times more desirable.
Posted by Vi at Wednesday, April 01, 2009 4 comments: