Loki and Jujube had two furry visitors this past weekend -- two Cavalier King Charles Spaniels, Ellie and Aidan. We had no major incidents, but I’ve to say, it was a bit stressful. Loki had met them before, but Jujube hadn’t. I couldn’t tell whether or not Loki remembered them. The first day that they were here, all dogs seemed to be fine. Ellie and Aidan are probably among the most submissive dogs with Ellie dominant over Aidan. Loki was the most curious, demanding to smell them immediately. Jujube was kind of aloof.

Ellie is pictured in the foreground and Aidan is in the background. 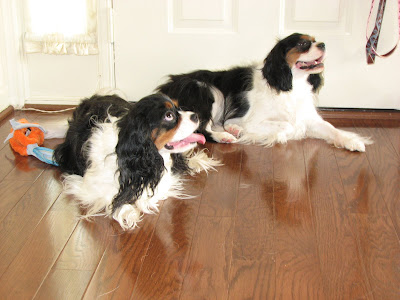 Here's a close up of Ellie. 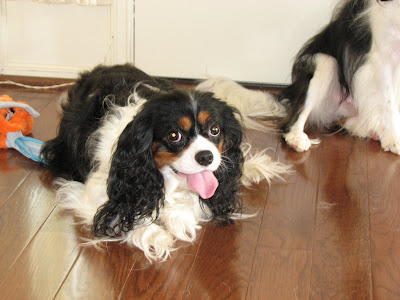 As time went by, Loki started to show more aggressive behavior: barking, growling, and showing teeth. My guess is that he was trying to figure out how to get these two furballs to not run amuck all over his territory. Two sorts of things seemed to help Loki:

Jujube seemed to be fine with the furry visitors, so we let our guard down with her. But maybe that was not a good idea. Although it was Loki who showed the most aggressive behavior (barking, growling, and showing teeth), it was Jujube who caused Ellie to yelp and whimper one evening. We never exactly figured out what Jujube was doing. To me, it seemed like she was not being aggressive, but nipping them to herd them. Clearly, shibas are not herding dogs. But because she’s been a mother before, we wonder if she was treating them as she might treat her own pups in her attempt to herd them. Another idea is that she was just trying to solicit play. She never showed any warning signs, never barked, and appeared to be calm. She’s not one to not show warning signs. In the end, we can speculate all that we want, but we’ll ever really know what went through her mind.

On Saturday evening, we went to Pat Troy’s, a restaurant in Alexandria renowned for being very dog friendly. They allow dogs with diners in their back patio and even have a doggie menu. I had never been there before and was eager to try out this dining experience. 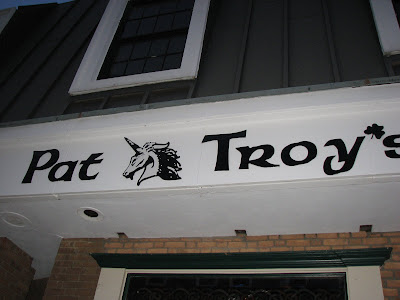 And what an experience it was! I don’t think I’ll ever go there with dogs again. They are known for being very dog friendly and also for having a doggie menu, so the back patio was completely full of dogs. Just at our table alone, we had four dogs. Then the table on one side of us had a lady with four dogs. And the table to the other side of us had a one large dog. I didn’t bother to count the rest, but there must have been at least 20 dogs in this one patio area. Too many dogs in too little of a space with nothing for the dogs to do is not a good idea.

The interesting thing is that we’ve dined plenty of times with Loki before without an issue. In California there are so many restaurants that are dog friendly that it’s not a big deal. When we’ve dined with Loki before, he’s often the only dog. At worst there were never more than a handful of dogs in an entire outdoor dining area. Here, Pat Troy’s is one of the few places that is dog friendly and even advertises itself as such, so there is an overflow of dogs.

Now, as if too many dogs in too small a space isn’t bad enough, there is also the doggie menu. When I first heard of this, I thought it was very cool. How fun! 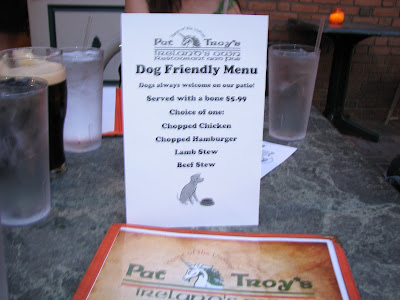 But let’s think this through… too many dogs, too little space, plus FOOD. Isn’t that a recipe for disaster? The lady with four dogs ordered for her dogs off of the doggie menu. But one of her pups didn’t really care to eat the lamb or beef, so the chunks of meat just remained on the floor. We didn’t have any problems with it, as we kept a close eye on all of our dogs, but a doggie menu seems to be a bad idea.

We had plenty of barking (Loki always wants to get the last word in), but no real incidents. It’s not a place I’d go to again with dogs. 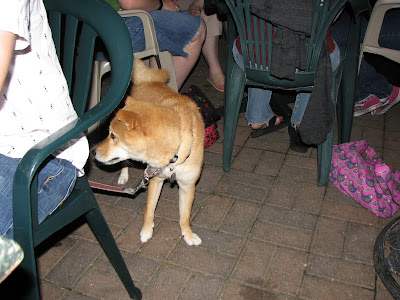 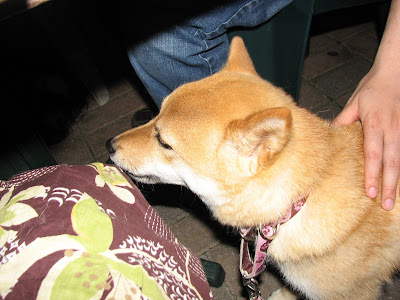 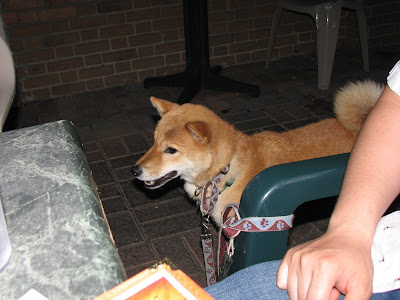 I couldn't resist sharing this picture & caption from www.ihasahotdog.com.

Anyone in the DC area lose a cream shiba???

I got this in my email box this morning:

Hi,
I was commuting home yesterday through North Potomac and came upon a woman who had found a young and rather timid white Shiba Inu wandering collarless. This was at the intersection of Travilah Road and Glen Road. She took the dog into Glenvilah Animal Hospital for a microchip check, but there was no chip. This morning the dog is listed as being at the Montgomery County Humane Society. Do you know of anyone who may be missing this little sweetie?
Thank you,
[name withheld]

The listing at the Montgomery County Humane Society says:

It's official! The first shiba meetup I organized was a big success! We had a ton of shibas there. The weather was perfect: No rain. Not too hot. Not too cold. The shibas took over the small dog area. There were like 20 of them! Well, maybe I'm exaggerating. I didn't count.

I absolutely adore this picture. 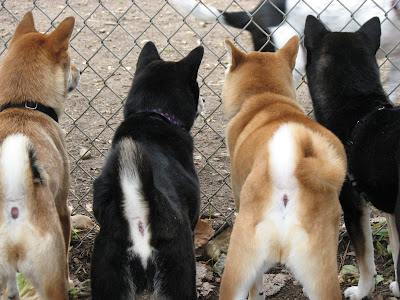 And in the picture below is Jujube. She doesn't normally play with dogs much, as she prefers human attention, but during the meetup she got into a few of the chases. It's so fun to watch a group of dogs chase each other around the park. This was the first time we took her to a dog park. She was super easy to leash back up as she stayed closed to us much of the time. 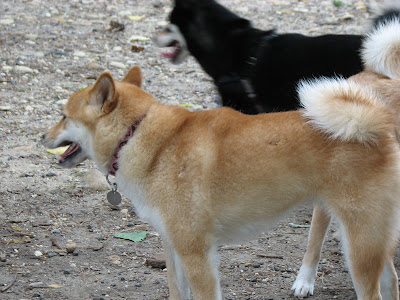 We decided to keep Loki at home and take just Jujube. The last time Loki was at the dog park was back in the early fall. And while he was fine back then, he hasn't been regularly socialized at the dog park since. I haven't had the time like I used to when I was a student. Now, I work full-time. So I was afraid that Loki would get into a dog fight. Yun disagreed with me & was sad that we didn't bring Loki. He thought Loki would be just fine. But I wasn't confident that Loki wouldn't get into a dog fight. Ideally, I should socialize Loki more by bringing him to the dog park when there aren't too many dogs there. And our behaviorist recommended that when I do this, I take just Loki, so that all my attention is focus on one dog rather than two. Still, I'm not sure I have the time for it. For the future, I'll schedule some on-leash meetups, like hikes or doggy happy hour, so I'll be able to bring both dogs.

During the meetup, we did have a couple tense moments. I wouldn't call it a fight, but there was definitely a lot of noise. Shibas are good at making lots of noise, like barking and screaming. One of our tense moments was caused by a chihuahua. And it was a vicious chihuhua. It was biting one shiba lots, but that shiba just took it rather than fight back. Then the owner came to scoop up her fur baby chihuhua. I am always amazed by how chihuahuas get away with bad behavior.
Posted by Vi at Monday, June 22, 2009 4 comments:

Email ThisBlogThis!Share to TwitterShare to FacebookShare to Pinterest
Labels: socialization/handling 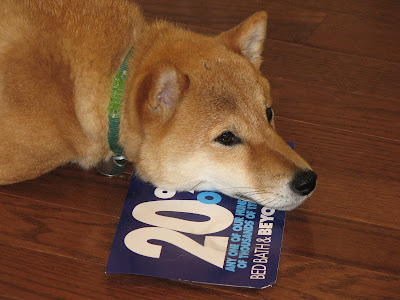 The Problem With Having Two Dogs

When one dog is just about done with shedding, the other one is just about to start.
Posted by Vi at Thursday, June 18, 2009 3 comments:

Because I couldn't let the Washington DC Shiba Inu Meetup group fall apart, I decided to step up and become the new organizer. I'm currently looking for assistant organizers. Email me at if you are interested.

If you live in the Metro DC area and want to join the Meetup group, click here.

Going to the vet

Here's Loki in the waiting room. What a good boy! Nice and calm. 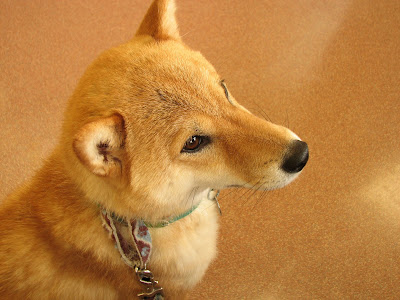 Here we are in the exam room. His tail was down and he was shaking practically the whole time. I put some treats down for him. 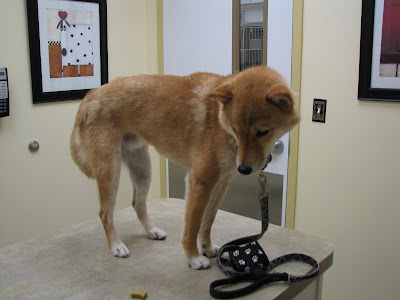 At first, he was too afraid to even eat the treats, but finally he succumbed and chowed down. 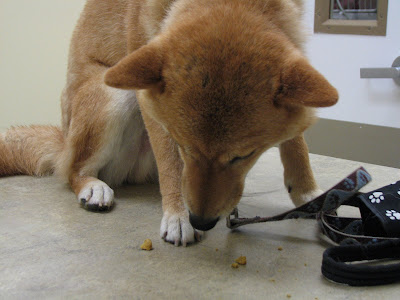 In the end, the vet had to use a muzzle and we had a vet tech help hold him too. We got his nails done, got some shots, and a general check up. No screaming, but lots of shaking. When the vet tech put Loki back down and took the muzzle off, Loki put on the biggest smile ever. He was super cute and so happy to be done.
Posted by Vi at Sunday, June 14, 2009 5 comments: 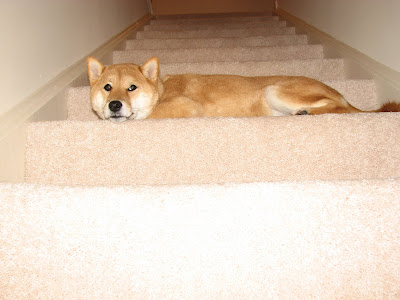 When we pick up Jujube, she sticks out all of her legs. It's very funny & cute. 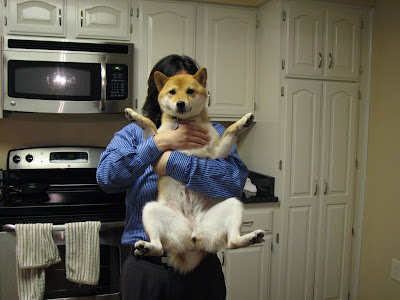 It's come to my attention that the Shiba Inu Meetup group here in DC has lost its organizer, and the group will deleted in a couple weeks if another organizer doesn't step up. I have only ever been to one meetup, and that was back in the fall. But now I'm considering being the organizer.

The difficulty is that I haven't been much of a participant in the previous meetups. So, I don't even know anyone! It would be easier if I had at least one other person to possibly be a co-organizer with. It does cost a small amount of money to be the organizer and it requires lots of time.

The perks of being the organizer is having control over the events. I already have tons of ideas -- day hikes, doggie happy hour, dinner with dogs, dog parks, boat rides with dogs. For the more ambitious, I think it'd be fun to travel out to a winery here that allows dogs. It's called Barrel Oak Winery (BOW... as in Bow wow... get it? get it?). Clearly, I'm partial to Virginia, but we could expand some events out to DC and Maryland.

So are there any DC area pups out there reading this blog? If you are in the DC area, would you be interested in a revived Shiba Inu Meetup?

Or if you run a meetup in your area, please share your ideas.
Posted by Vi at Wednesday, June 03, 2009 3 comments: