We recently decided to hire a dog trainer to help us with Loki, and well, Juju could use some training too. We didn't agree about the dog behaviorist. I thought the dog behaviorist was fine, but Yun didn't care for her and moreover, felt that she was way too expensive for what she provided. It was hundreds of dollars for a consultation. From what I had gathered her services and fees were market price for a dog behaviorist.

Anyways, given that obedience training is always suggested as a way to help an aggressive dog, we thought a trainer might be a good alternative solution. This time, I let Yun do the research and pick one out. He found someone to do a set of private lessons for us at a reasonable price.

Today was our first session. She was a tall, mild-mannered lady. (We're short people, so everyone seems tall to us.) Actually, she sort of reminded me of our dog walker. She went over some basic commands, like come, sit, down, focus, and settle. We signed on for a set of seven sessions in total. It's not so much that we don't know how to train our dogs, but rather that having the structure will help ensure that we keep up with the training. Also, she'll help us do exercises outdoors where there are more distractions.

The source of Loki's problems is anxiety. He is a very anxious and insecure dog. I'm hoping that the obedience training will give him more confidence and trust in us. Surely, it won't hurt. And as an added bonus, Juju will get some training too. We never taught her anything other than her name, come (which isn't reliable), and sit.

Loki is one very lucky dog in that we have the resources to hire all these specialists for him.
Posted by Vi at Sunday, July 31, 2011 5 comments:

Why do dogs rub against smelly scents?

Both of my dogs love to rub their whole bodies against random smelly scents. At least it seems random to me. Why do they do it? The explanation that I've always been given was that dogs are trying to hide their own scent. But is that the real answer?

Slate reports something different. I thought their explanation was pretty compelling, and certainly much more convincing than "hiding their own scent". What do you think?
Posted by Vi at Monday, July 25, 2011 9 comments: 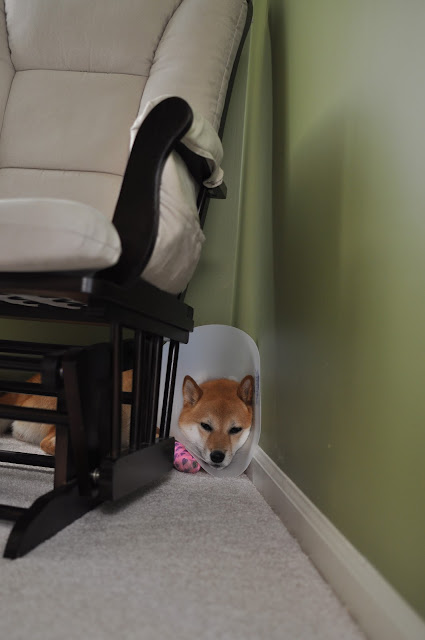 That there is Juju. She's hiding in the corner behind my glider. She is sporting a pink bandage on her front paw and the cone of shame.

The pups got into a fight this morning. It's been a while since their last fight. The two of them were outside in the backyard, and I think they were chasing a chipmunk or something like that. It must have been running around inside the gutters. Anyways, the two of them would make a horrible pack in the wild. They don't cooperate to get prey; they compete against each other.

Her paw was bleeding and we took her to the vet. It's a good thing that she is so well-mannered with people, so that she could be checked out and treated. Loki is also sporting some damage to his face. But his cuts weren't as severe as Juju's, so we left him alone. And well, if we really had to take him to the vet after a fight, we'd have to crate him to be transported and then he'd probably have to be sedated just for the vet to check him out.

To say I'm frustrated with Loki is an understatement. I was frustrated two years ago. I'm way past frustration now. I feel like I'm just surviving with him. Trying to make it through the day with him, one day at a time.
Posted by Vi at Saturday, July 16, 2011 4 comments:

Jujube is a such a sweetheart. She puts up with Baby wonderfully. I caught the two of them playing under our dining room table. She tolerates his clumsiness so well. At least I have one dog that I don't have to worry about.

Do opposites attract? Well, the science may say no, but when it comes to doggie parenting styles, it seems like Yun and I are as opposite as can be. Perhaps we aren't that different, but in these past few days, it feels like we're miles apart.

When we initially picked out a pet behaviorist, I did the research and I picked her out. Therefore, her philosophy was more in line with mine, and not at all in line with Yun's. I've always been  much more inclined towards positive reinforcement, and through the years I've become even more so. Yun thinks that positive reinforcement certainly has its place in training, but you can't do everything with just positives and no negatives. Yun and I just don't see eye to eye on this. We never have, and I don't think we ever will. The way I see it is that Loki is an extremely sensitive and anxious dog, and anything negative is detrimental to his well-being. Another difference is that I tend to be in favor of more management (similar to the behaviorist) whereas Yun tends to dislike management. Our disagreements are more nuanced than just this, but anyways this gives you an idea about our differences.

We both love Loki and are trying to find some common ground. We're trying to pick and choose from the behaviorists suggestions to find something that is acceptable for both of us. I think if it were up to me, I would have implemented all of her suggestions. But Yun feels strongly against some of them. And so, we are left trying to piece together a solution that can work for both of us. We definitely are trying to work towards a common goal. I just wish it weren't so hard.
Posted by Vi at Sunday, July 03, 2011 No comments: