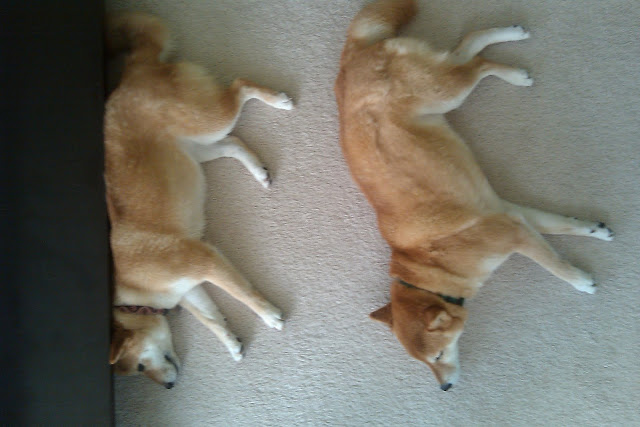 We're seeing some signs of improvement in Loki's behavior as it relates to Baby (who is more of a toddler at this point, but let's still call him Baby). In general, Loki moves away when Baby approaches him. The other night, Baby got too close to the dogs while they were eating their dinner (we were right there, don't worry). In response, Loki backed up without having finished his dinner and just moved away. Unfortunately, Juju took the chance to be opportunistic and gobbled up his food. We scolded her and then gave some more food to Loki. I'm not sure if I buy all of the dominance/submissive theories of dogs, but if there is any truth to that, then I think that Loki walking away from his food is a sign of submission to Baby. Also, it seems that Loki has gotten better as Baby started to walk. Baby now stands taller than the dogs. Not much taller, but still taller.

Our approach has included all of the following:

Why is Juju in the bathtub?

Recently, Juju has been hiding in the mornings. Where does she hide? In the bathtub. 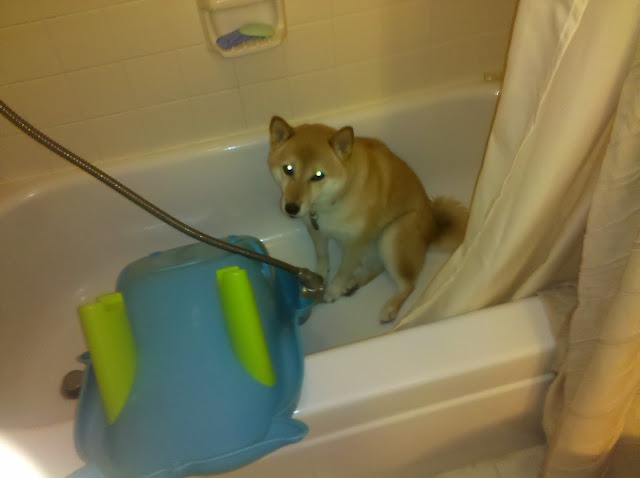 Yun tells me that she goes there after I've left for work in the mornings and after he's gotten out of bed. Why does she go hide in the bathtub? Or is she trying to tell us that she needs a bath? Any ideas?
Posted by Vi at Friday, August 12, 2011 6 comments:

Any advice for housetraining?


Hi, we are also having trouble with our 8 week old Shiba. We live in an Apt in New York City, and can't take him out until he's vaccinated. What is happening is that when he has to go to the bathroom (and this is after he is holding is for a long time), he get's so frustrated/anxious that he runs around the apartment biting us! Finally after 10 minutes of this he'll finally just go on the floor.

Any tips on how to get him to use a pee pad, calmly?

We were actually never very successful about potty training Loki until after he finished his vaccinations. Once, he could to on the grass and trees and bushes, he was good to go. Before that, we were getting accidents at the rate of maybe one a week or one every two weeks. After he was done with his shots, he became very reliably potty trained. So, given our poor track record, I'm not sure if I am qualified to offer tips.

My advice would be to always praise and treat when your dog goes on the correct spot. Throw a potty party! Never scold your dog for going in the wrong spot.

Use crate training. The dog goes in the crate (with toys and treats and maybe a kong) whenever you aren't able to watch his every move. Or you can tether the dog to you, so that you'll know if and when he feels like eliminating.

I think the rule of thumb is that a dog can hold his pee for as many hours as he is old. So a 2 month old dog should be given the opportunity to eliminate every two hours. If I recall correctly, Loki was able to do more than that. I think I added on an additional hour to his age in months. When he was 2 months old, he could hold it for 3 hours. Etc. I think by 5 or 6 months old, he could hold it for 8 hours. And generally, even now, I don't ask them to hold it for more than 8-9 hours, even though they probably can.

At one point, I used to give out the advice of picking your dog up. That worked well for us. If I caught Loki peeing in the wrong spot, I immediately raced over and picked him up mid-pee. He would stop peeing and then he's finish after I placed him down at the correct spot. Unfortunately, I've heard that this advice doesn't work for everyone, and for some people, pee just got everywhere. So, you can try it, but it might not work for you.

Despite the fact that Loki is our problem dog, he is really easy to train. It sounds strange to say, but he's actually a really good dog ...  aside from the fact that he bites. But, no really, he is! I'm not entirely sure why, but he is so easy to train. He's willing to please. He's willing to listen. He just gets it faster. I even think that he really enjoys training. He loves it that we tell him what to do. He feels more secure when we do. And that is exactly what we want -- for him to feel secure and safe.

Juju, on the other hand, is incredibly difficult to train. We've been working on "down" with her all week long, and I still don't think she gets it.

So, we have one dog who is really easy to train and is very well-mannered, but has a bite history. And a second dog who is frustratingly hard to train, has no manners, but is a complete sweetheart. A baby and a vet can do anything and everything to this girl, and she won't complain. But don't try asking her to give you a "down" or to "come" or anything else for that matter. She is one stubborn dog. She wants to do what she wants to do and no one can convince her otherwise. Or she's stupid, but I don't think so. A stupid dog wouldn't do this or that. She just doesn't like anyone to be the boss of her.

Two dogs as opposite as opposite could be.
Posted by Vi at Saturday, August 06, 2011 5 comments: