For Christmas, Loki got a giant rawhide bone. It began looking like this: 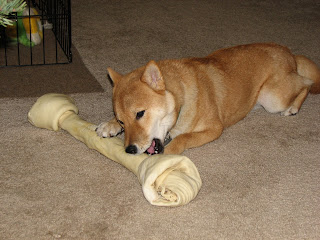 Today Loki gnawed off a huge end piece, so it looked like this: 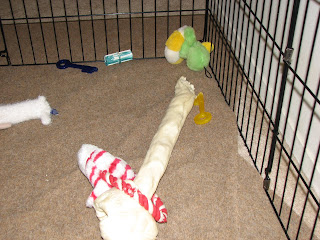 Uh-oh!
If a huge chunk is missing, then where is it?
Loki must have buried his precious rawhide.
Where does he bury his precious items?
Obviously, in our bed. 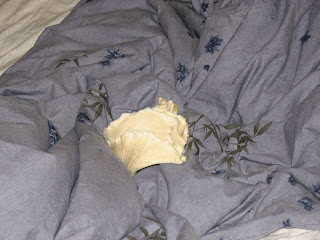 Yay! Congrats to Yun, Loki & myself for a successful nail trimming session this afternoon.

After all of our stressful and dog aggressive attempts at nail trimming, we finally decided to buy a muzzle. I took a look at 2 different kinds. I recommend the Basic Training Nylon Muzzle from PetCo.

This one seems much sturdier and secure than the Top Paw Mesh Muzzle that I found at PetSmart.

Before the session, I took him on a long walk in attempts to drain some energy. Loki never ever seems to run out of energy, but I'm sure a long walk did help.

We put him up on the bathroom counter, so he was high up and couldn't run away. We took our time putting the muzzle on him and adjusting the straps so that it fit him. As we took it on and off, we gave him treats.

Yun trimmed Loki's dew claws with clippers. They were so long that they were getting caught on everything - his toys and even his collar. Then I held him while Yun did a little bit of all his nails with the Dremel. The process is definitely a two person job. I made sure to hold his head tightly. I'm sure that Loki was bearing his teeth (I couldn't see his teeth from my angle), but he didn't lash out, scream, or struggle much when I restrained him.

Afterwards, he got a nice piece of pork and also a piece of chicken. Then we played fetch with him for awhile. We wanted to make sure that he had a really fun experience afterwards.

We will try to repeat this exercise a few times a week. It's a bit unfortunate that we have to use a muzzle, but it honestly is a good tool to use if you have to. Hopefully with time, trimming nails won't become a stressful ordeal for anyone anymore.
Posted by Vi at Sunday, January 27, 2008 4 comments:

Today was Loki's first trip to the Farmer's Market! It was a wonderful place to socialize him. It is a bit overwhelming, so I wouldn't recommend it as the first place to take a little puppy. But for Loki, it was perfect. He was pet by a few people. One woman even had a doggie treat to give him! It's a great place for Loki to practice his manners. In particular, to be able to pass by people without wanting to sniff each and every person. He's pretty good at passing people and ignoring them. He's not as good at passing other dogs nicely, but he's definitely improving. He'll pass by with a little bit of interest, but not straining with all his might to sniff them. 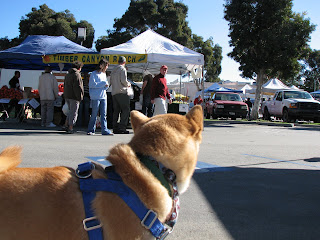 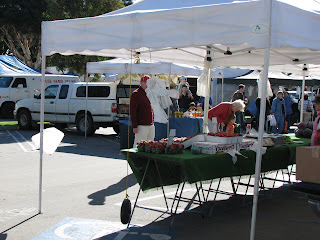 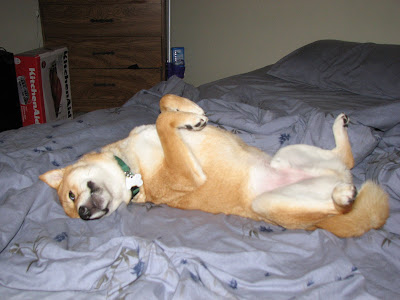 Loki got to experience his very first pet sitter this week. I had to go away for business for a couple days, leaving Loki alone for at least 11 hours while Yun worked. We hired Heather of Pet Solutions Unlimited. She was the dog trainer for our 8 week puppy class this summer.

While I was away, I felt like a nervous mother leaving her child in the care of a babysitter. Would Loki behave? Would he be aggressive towards a someone coming into his home in our absence? Would Heather be able to deal with him?

Luckily, everything went pretty well. Heather was able to deal with Loki just fine, and she left us notes about their time together.

Day 1: Loki decided to play the "Catch me if you can" game with Heather. I'm sure that must have been lots of fun! She finally caught him by cutting up a bunch of treats and tossing them in his exercise pen. Then she was able to leash him up and take him out. Once outside, she reported that he listened and heeled very well.

Day 2: Determined not to play the "Catch me if you can" game again, Heather leashed Loki up while he was still in his exercise pen. Then they went for a run outdoors despite the rain.

Yay! I'm so glad that everything went well and that he was well-behaved on their walks. We'll be sure to hire Heather again if we ever need to.
Posted by Vi at Saturday, January 26, 2008 No comments:

Why is it that a small 24 lbs. dog takes up half of a queen-sized bed, leaving the remaining half for two full grown adults?

By the way, the original intent of us video taping Loki when he was sick was to show the vet on my laptop. I highly recommend this. It's much more informative to the vet than having you try to describe exactly what your sick dog sounds like.

Thanks to my dear Yun for getting the camera out in time to capture the moment!

So next time your dog is sick have your camera ready!
Posted by Vi at Thursday, January 10, 2008 1 comment:

8.) In my laptop, especially in the keyboard.

7.) In my mouse. If you're ever wondering why your mouse isn't working properly, check for dog hair.

5.) In my suitcase while traveling. This is exactly why I bought travel-size lint sheets by Scotch.

4.) In my bag of microwave popcorn. How did that happen? He didn't poke his head in or around it.

3.) On our clothes even after they are washed.

2.) In Loki's eye! It doesn't seem to bother him at all, but it did freak me out. I thought something was wrong, but it didn't phase him.

1.) In my tube of mascara. Imagine trying to put mascara on with a black coated dog hair poking your eyes out.
Posted by Vi at Thursday, January 10, 2008 No comments:

Email ThisBlogThis!Share to TwitterShare to FacebookShare to Pinterest
Labels: shedding

Loki is just about all better now. I had gone away for a conference this past weekend, so Yun took care of Loki for three days. The first day that I was gone Loki didn't eat breakfast and was throwing up yellow, frothy bile. According to our research, vomiting yellow frothy bile is an indication that the dog is too hungry. But Loki wasn't eating! We were all worried about if this new lack of appetite and vomiting was related to his respiratory issues or if this was something new.

Later that same day, Yun reported that Loki ate and seemed to be back to normal. Yun's hypothesis was that Loki missed me. Aww, poor doggie.

Yun also reported that Loki only wheezed once in the past three days. So it looks like he's all better now.