Dreaming about your dogs

Do you dream about your dogs?

We do.  Does that make us crazy dog people?  I'm not sure.  Yun tells me he has had anxious dreams of Jujube running away.  Even though she stays close to us around the house, she loves to bolt out of the front door and run like the wind.  Last night, I had dreams of Loki being around young children and me stressing out telling the mothers to keep their child away from Loki lest he bite them.  In the dream nothing bad happened, but I was very stressed and worried.
Posted by Vi at Saturday, February 27, 2010 3 comments:

This commercial featuring dogs in slow motion includes a shiba, which (obviously) is the most awesome one. The shiba shows up at 0:26, 0:36, and 0:47.

Thanks to The Keeks for sharing this on the Dogster Shiba Forums.
Posted by Vi at Friday, February 26, 2010 2 comments:

Things to do with a puppy

I had a reader ask me what sorts of things might a shiba puppy enjoy doing. Below I offer my tips, but if you have anything to add, please feel free to comment.

Puppies have lots of energy. They are both curious and hesitant about their world. The best part about getting a puppy is that everything is new to him. If you introduce a ball to your puppy, it's the first time that he's experiencing a ball. Here is Loki being introduced to a ball for the very first time. As you can see, he doesn't quite understand what it is. It was so fascinating to observe his reaction. I also remember when Loki first encountered a speed bump on the pavement. He was rather wary of it, but soon learned that it was nothing to be concerned about. I suggest that you slowly introduce many things to your puppy. Get him or her accustomed to all sorts of things, toys, textures, environments, and types of flooring. Also, get him or her accustomed to all sorts of people, dogs, and other animals.

When Loki was a puppy, we played with him using a bunch of different dog toys. You can try some standard games like fetch, wrestling, and chase. Here are some other ideas based upon what we did with Loki. We used some string to play with him. We gave him a puppy kong (Kong Small Puppy Toy

). Sometimes it was filled with dry kibble. Sometimes we used peanut butter. Sometimes we used banana. When he was a little older, we gave him some puzzles to solve to work his mind. For instance, we put kibble in a water bottle and he had to figure out how to get it out. (Later we stopped using a plastic bottle, because he's end up chewing on it. And instead we got a Tug-a-Jug.) And we also had him try to figure out how to retrieve a toy ball on top of his exercise pen. Loki also really enjoyed unstuffing his stuffed toys. I personally don't care for this activity, because it doesn't take long before the toy is completely destroyed. And lastly, of course, all puppies love doing the Shiba 500, which is when they run around like crazy. This isn't something that you do. They just do it all on their own, whenever they feel like it.

Puppies (as do all dogs) enjoy being outdoors. Take her on walks after she has received the necessary vaccinations. Let her explore the vast new world. Take her on hikes, to the beach, to the mountains, to park, to the lake, or to the busy city streets.

Life is about experiencing all that the world to offer. So be sure to offer those opportunities to your puppy.
Posted by Vi at Saturday, February 20, 2010 3 comments:

Email ThisBlogThis!Share to TwitterShare to FacebookShare to Pinterest
Labels: puppy

Today's Daily Puppy was a Shiba!

Looking all cozy on this lazy Sunday morning. Loki must be feeling particularly loving today, he let Jujube on the bed today. 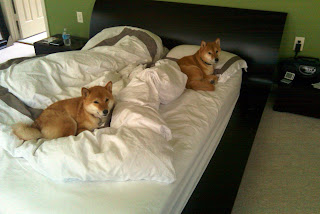 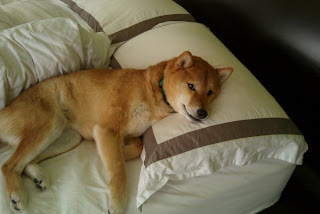 After seeing my two shibas navigate the massive snow, I realized why shibas make great Japanese mountain dogs. Prior to owning shibas, my mental image of a "snow dog" was a husky.  That's what most people think of. Shibas are little dogs. But when you need to climb through snow that is higher than you, being little is a huge benefit. Shibas are light enough so that they don't sink all the way down. They sink down only to their chest, and can easily climb up and proceed forward again. This was how Jujube was able to plow her way through our backyard and make all sorts of paths for herself and Loki. It doesn't matter that the snow is taller than she is; she's light enough so that she doesn't sink down and get stuck. No wonder shibas are little, double-coated dogs. They are perfectly built for the snowy mountain terrain of Japan.
Posted by Vi at Saturday, February 13, 2010 No comments:

Playing in the snow

As if two feet of snow wasn't enough, we got even more on Wednesday morning.  Well, at least the dogs loved it.


Loki looking up. He's got a little bit of snow on his nose. 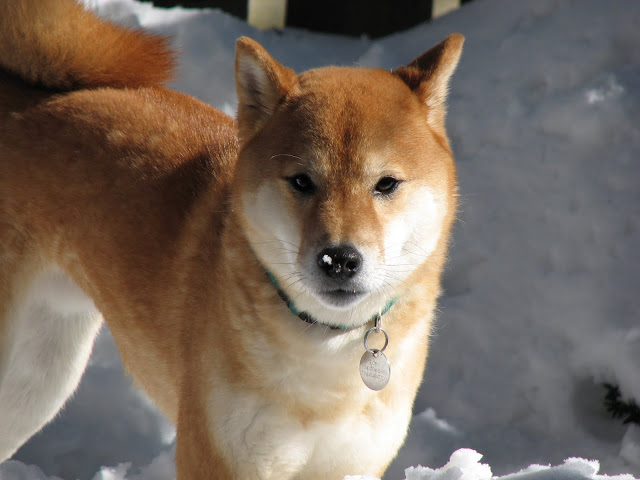 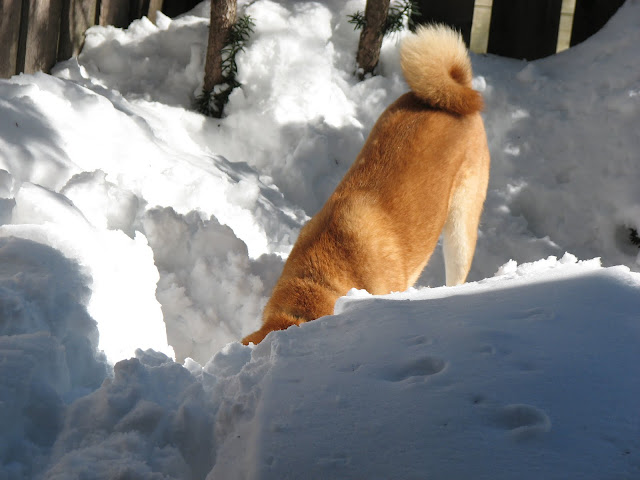 When the two of my pups play, there is a lot of noise, a lot of teeth, and a lot of speed. It can look scary to people who haven't seen such rough play, but it's all fun and games to them. 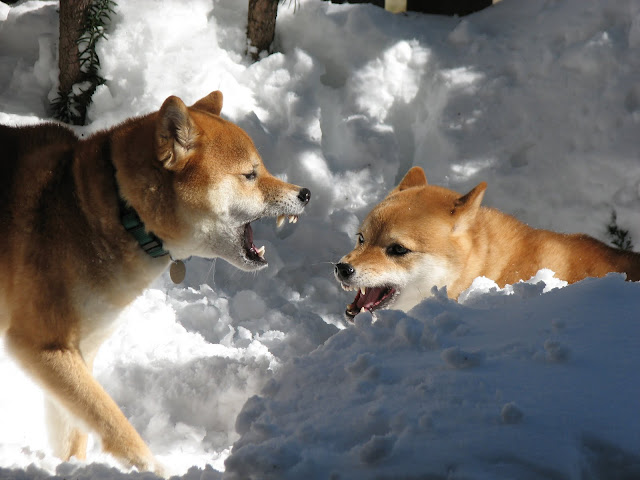 Doesn't Loki look so mean in this last shot? 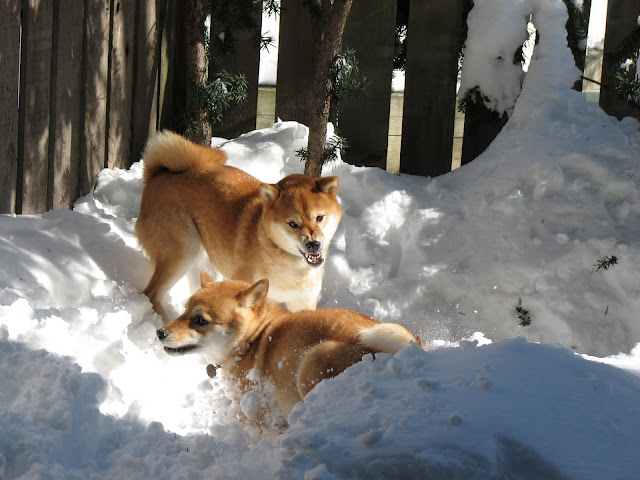 A tale of two tails

Loki has a very loose curl.  His tail curls and uncurls easily and all the time. You can tell when he's fearful or apprehensive when his tail uncurls.  His tail seems to have a personality all on its own. 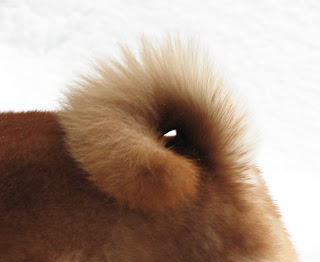 Jujube, on the other hand, has a very tightly curled tail.  It's more like a little bundled knob.  Perhaps she never gets fearful or apprehensive -- she is pretty fearless.  The only time I see it uncurled is when she is fully relaxed when sitting or lying down, and even then, it doesn't happen often. 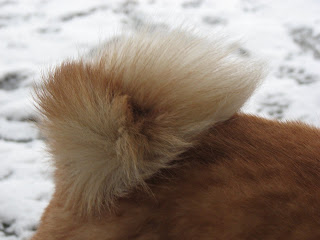 Jujube vs. The Snow, Round II

A lot more snow later, Jujube is still winning. This time she has to jump into the snow. 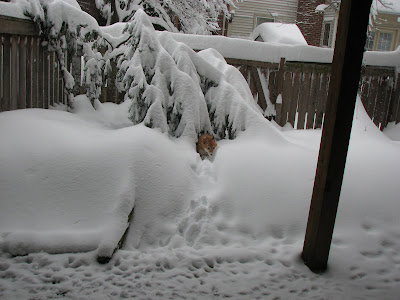 Jujube vs. The Snow

Here's Jujube making her way through our backyard. Why she ventured out there? I don't know. She's happy to pee and poop in the foreground area, the area under the deck where there is little snow accumulation; so she's not going out there for that purpose. Maybe she's thinking that if the snow keeps up, then she'll be able to make her escape and jump over the fence. 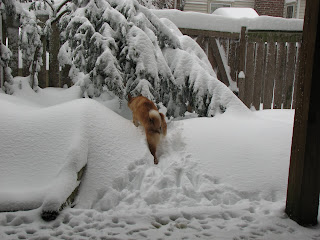 We have about two feet of snow now and it's still snowing. The snow is taller than she is! But that doesn't deter her from trekking through it. Shiba Inus are Japanese mountain dogs. I guess this is what they do best.

In honor of the final season of ABC's LOST, here's a picture of a shiba!