Here is the last part of the Shiba Surveys.

Thanks for your participation!
Posted by Vi at Monday, February 23, 2009 4 comments:

Thanks for your participation & also your patience for all the re-postings.
Posted by Vi at Monday, February 16, 2009 2 comments:

Making progress on having two dogs

We’ve had Jujube for over three weeks now, and not a fight in a week and a half. Yay!

Jujube has learned Loki’s triggers, and Loki has learned to give fair warning. He mainly seems to be territorial -- he controls his space and doesn’t let her pass. For instance, Loki loves to sit at the top of the stairs and won’t let her pass. She sits pitifully in the middle of the staircase and whines. He also will claim doorway space, like the doorway between the kitchen and the dining room. Jujube has now learned that she can’t go pass him, she goes all the way around him. Sometimes they contest the front door mat. They don’t fight over it, but they will sort of verbally argue. I’m not sure how to describe it. It’s a combination of barks, whines, and shiba-talking. Lastly, he really hates it when she steps over him or on him. This will provoke a warning snap. I know, snapping isn’t a good thing, but at least it’s a warning and not a bite.

We originally thought that Jujube would end up being more dominant over Loki. She has plenty of alpha traits; she seems like more of a natural alpha to us. For instance, on all of our walks, she is up front 100% of the time. And not only does she like to be in front, but front and center. It took me awhile to teach her to not walk into me and to not charge on ahead of me. Loki, on the other hand, is always lagging behind both of us. Jujube is always curious, confident, and without fear. She demands attention. And she claims the bed. (Interestingly enough, Loki doesn’t claim the bed at all.) In fact, she’ll literally walk all over us on the bed. She doesn’t care. She does what she wants. She never follows Loki. She’ll follow us like she’s our shadow, but she never follows Loki.

Although Jujube may exhibit these sorts of alpha traits, she is not territorial; Loki is, and being territorial is also an alpha trait.

When they wrestle, they take turns humping each other. There’s no clear winner in that battle. So, that doesn’t give us a clue about who’s on top.

In the end, Loki’s aggressive and Jujube is not. So she just learns to avoid his triggers and in that sense, he gets to be more controlling, more of the alpha.


Quizzes by Quibblo.com
Posted by Vi at Thursday, February 05, 2009 No comments:

Since we got Jujube (and mind you, this has been less than a month), I've lost not one, not two, but FIVE pairs of underwear to her chewing. FIVE! MY underwear. Not Yun's. Definitely nothing of his. Not socks. Not pants. Nothing else in the entire laundry basket is disturbed. Only my underwear!

I'm going to have to shop for a hamper with a lid this weekend.
Posted by Vi at Thursday, February 05, 2009 7 comments:

I began this blog to share my experiences as a first time dog owner and also to post adorable puppy pictures and terribly cute videos. At first, it was just a way for me to show my friends and family pictures of Loki. It was certainly not something I put a lot of thought or planning into.

However, now having maintained this blog for over two years, I've realized that some of the traffic to this site is from people who are either considering a shiba inu or from people who recently got a shiba inu puppy. I'm happy to be a resource and hope that my blog is informative.

Along with posting experiences, pictures and videos of my two dogs, Loki & Jujube, I'll also try to post up some general information about the breed and offer tips. To that end, I'm hoping that I'll also be able to get good feedback and comments from my fellow shiba owning readers.

If you have any comments, questions, or blog topic suggestions, you can contact me at lokitheshiba@gmail.com.

The Beauty of Having Two Dogs

When I got Loki, I was so enthusiastic about training him. We started training him almost on day one. Training him basic commands. Training him on basic manners. And potty training. I read a ton of resources. I bought books. I borrowed books from the library. I took him to puppy socialization sessions. And we enrolled in a puppy obedience class.

Our second dog? Hm... not so much. It's so interesting how much my enthusiasm has faded. I was so gung-ho about training our first dog. Second one? Eh... I hardly care.

It's true that the whole point of getting an adult was because I had no time to train a puppy. And because she is non-aggressive, I also feel less urgency to train her. But after a couple weeks, we still have done almost no training with her.

Even though she's completely non-aggressive, she has no manners. She jumps on people. She whines for attention. She's pushy. She will ram her muzzle under your hands, demanding that you pet her. Etc.

So, I still had to do some training with her. To begin with, since we re-named her, I had to teach her her name. And she also didn't seem to know basic commands like sit and down.

And what about the command 'come'? Around the house, she's so attached that she always responds to the command come. But the other day she darted out our front door, and well, 'come' doesn't work out so well for a shiba running off leash outdoors. Even though she is so attached to us indoors, outdoors she's still a shiba, curious about exploring the world around her. She made it down the street with all of our neighbors trying to catch her. I ran down the street and scooped her in my arms. She looked so happy to be running around free.

Anyways, back to the training. I learned quickly that Jujube's motivators are very different from Loki. Loki is extremely food motivated. He works for any and all food. In contrast, Jujube loves attention. In fact, this makes it easy to train her, because I can do it without treats. I always ignore her when she demands attention -- and boy is she pushy when she wants attention. If she doesn't get free attention, then she has to work for it. And this is how she learned sit. She sits, and then she gets pet. Sit, then pet. As an aside, it's not true that she's completely not food motivated. Apparently, she loves cheese. Liver treats she could live without. But cheese is golden.
Posted by Vi at Monday, February 02, 2009 4 comments: 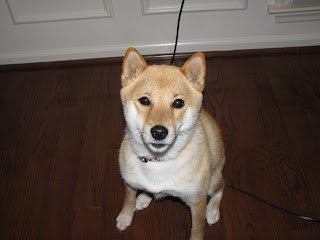 Above all, I am the most thrilled about the fact that Jujube is completely not aggressive. I absolutely love that about her. It's such a refreshing contrast to Loki. Maybe I should give up on puppies in the future and just get young adults that have already been properly socialized and trained by a good breeder.

I don't think that Shibas are good for first time dog owners, like we were. Of course, I learned a lot from Loki. I've gained tremendous confidence in dealing with difficult dogs. And I've been fairly successful in implementing positive reinforcement methods to deal with his aggression -- something that I'm proud of. I'm very grateful for all of those experiences.

But at the end of the day, we still made mistakes along the way, and by now I've given up hope that Loki will ever be 100% non-aggressive. In contrast, I feel like with Jujube, she truly is non-aggressive. And I love that. Obviously, the breeder knows what she's doing.

When I took Jujube to the vet for the first time here, the vet was so impressed with her. Jujube was completely calm and fine the entire time -- perfectly fine through all the poking, proding, needles, shots, bright lights, teeth checking, ear checking, and eye checking. It was amazing. Not a whine. Not a peep. Not a snarl. Nothing!
Posted by Vi at Sunday, February 01, 2009 5 comments: