I was away from home last Thursday evening for work. Friday morning, I get a voice mail from Yun, telling me that if I got home before he did, I should take Loki out to poop and hopefully he will poop out aluminum.

Aluminum? What?! What kind of message is that? I left for only one night. One
night!

I call to ask what happened.

Thursday night, they both went to bed at the same time; Loki taking over my spot on the bed. Friday morning, Yun wakes up and sees Loki sleeping innocently next to him. But as soon as Yun steps into the basement, he sees paper and aluminum foil shreds all over the place. Apparently, Yun left his half-eaten burger on top of a box, and it was within Loki’s reach. So it’s possible that Loki ingested aluminum.

Luckily, Loki is not displaying any symptoms of discomfort or other problems. Without seriously digging through his feces (because doesn’t that sounds like fun), I did notice some very, very small particles of what looks like aluminum. So, it seems to be passing through his system just fine, without any major problems.
Phew!

And well, humans aren’t that smart, because just a couple days later, I made the exact same mistake. This time, it was quarter of a bagel wrapped in paper. Again, on top of a box. Our home is full of boxes, in various stages of being unpacked, no tables, and a kitchen that reeks of paint and turpentine.

Having a Dog Makes You Happy

But the one exception to this rule was getting a dog. Even though getting a dog is an external force, it most definitely did make me happier. The question is, why?

Most depressive feelings are self-indulgent and self-centered. What’s wrong with me? Why don’t others like me? Am I fat? Am I stupid? Me, me, me, I, I, I. When you have a dog, you have to take care of it. The focus is on another being. There are two effects. One is that you don’t obsess over you own failings. Or at least, you can’t spend as much time obsessing, because you are forced to care for your dog. The second is the act of caring for another creature is satisfying. You feel important. This helpless creature depends on you for his livelihood. Even if you don’t matter to anyone else in the world, at least you are the most important person in the world to your dog.

Having a dog makes you less uptight. You let go of the small stuff. It’s no big deal that the dog chewed up your glasses case (like Loki did this weekend). It’s still useable, sort of. And even if it weren’t usable, I could just buy a new one. The world isn’t going to come to an end. The little things don’t matter anymore.

Having a dog helps you get to know your neighbors. When you own a dog, you have to walk him. For me, walking Loki meant saying “Good morning” and “Hi, how ya doing?” more often. Soon enough, you the same faces over again, and you end up knowing your neighbors and service workers. While you might not be the best of friends with these people, a friendly smile always brightens up anyone’s day. And aside from that, it’s nice to have some sense of belonging in a community.

A dog isn’t a cure all. I’m not a psychiatrist and I’m not prescribing getting a dog as a miracle treatment. A dog is also hard work. Some days Loki’s behavior frustrates me. Some days caring for him adds yet another task on my endless “to do” list. But the net effect is definitely positive.

Yun and I are painting our kitchen cabinets white.

Conditional on the fact that I own a Shiba Inu, what's the probability that I will end up painting dog hair into my kitchen cabinets?
Posted by Vi at Monday, November 17, 2008 5 comments:

Maybe a cat? Maybe not.

The reason we wanted to get a second dog is because Loki spends a lot of time alone, and we think that isolation isn't good for a pack animal. But packs don't have to be of the same species. So another option might be a cat... except for the fact that I'm allergic to cats.

I searched for "hypoallergenic cat" on Google and the first entry is Allerca. I went to their website and was absolutely shocked. The cheapest one is $7950!!! And on top of that there is a 6 month waiting period. I don't suppose this is a breed that you'd find in shelters.
Posted by Vi at Wednesday, November 12, 2008 9 comments:

I wanted to make Loki into the Firefox logo and started with this picture. 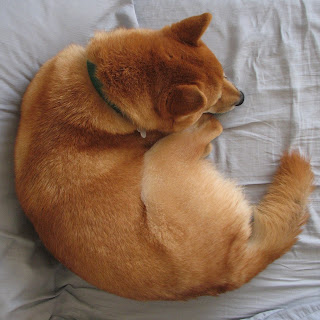 Not having any graphics software, I asked Yun to do it, who outsourced it to Siew Ling. Thank you Siew Ling for a great job making Loki into the Firefox logo! What do you think? 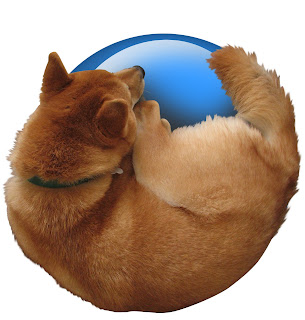 Loki was on the wondrous carpeted stairs of our new home when Yun said, "Loki, Sit." Sure enough, Loki sat. 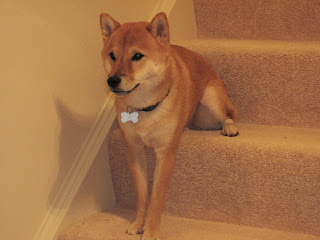 Email ThisBlogThis!Share to TwitterShare to FacebookShare to Pinterest
Labels: training

Here's Loki in his new fenced yard. Yes, it's small, but at least it's something. He loves his yard. There are different levels so that he can jump around when he does his Shiba 500. 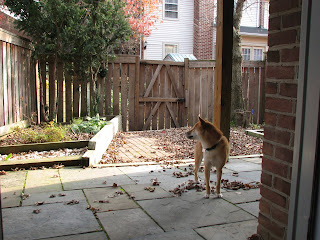 The first time we took him to his yard, he promptly peed on a couple of the trees. The second time we put him there, I think he didn't pee at all. I'm afraid that once he learns that it's his yard, he will refuse to pee in it. Perhaps he's already learned that this is his yard. Grrr... that was the point of getting a yard for him - so he could pee there! 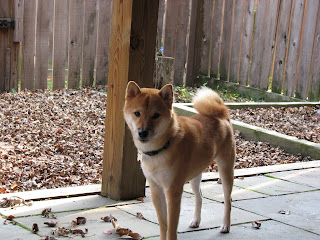 Good thing we don't want a garden or grass or any other sort of vegetation, because Loki's already started digging a hole. 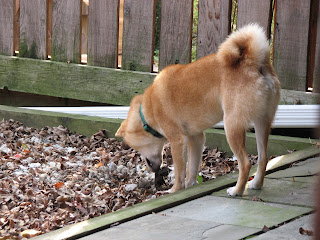