It happened AGAIN! And this time I caught the culprit. It was Loki! Not Jujube. I caught him red-handed. 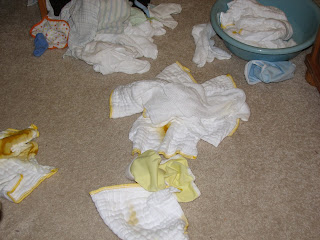 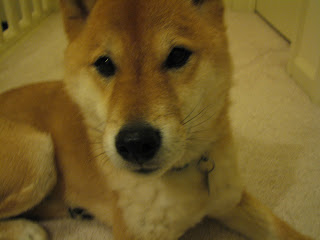 I cloth diaper my son. It's cheaper than disposables and arguably greener. But this also means that I almost always have a pile of dirty diapers. At first I wondered if the dogs would get into the dirty diapers, but they really didn't... until yesterday...

We had dirty diapers scattered on the nursery floor. GROSS! Nature's Miracle is good for more than just dog pee/poop.

We think it was Jujube. She's the naughty one, who used to chew up my underwear.

The dogs' beds are back in their respective corners of the dining room. Here is Jujube. 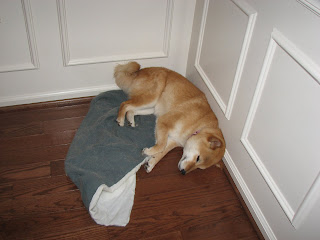 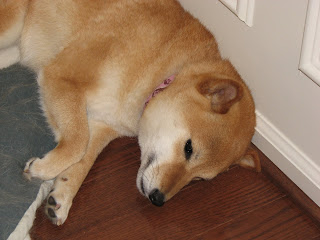 Here is Loki in his corner. I don't know why he's facing the corner. It makes it look like he's sulking. 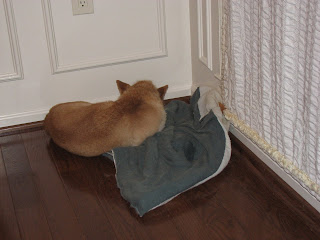 As you can see, their dog beds aren't real "beds," but just an old comforter that was cut up. Giving them their own space really does help keep them off of other places (like the couch). Every time you want your dog not to do something, you better have a replacement activity. What do you want your dog to do instead? To keep dogs off of the couch, make sure you are giving them a place to go to instead, a place of their own. I can't say the method is fool proof. Sometimes we catch Loki sneaking a nap on the couch or on our bed. But at least when we say "off," he knows where he's supposed to go instead.
Posted by Vi at Saturday, April 24, 2010 2 comments:

What's mine is mine and what's yours is mine

We have two dog beds in two corners of our dining room. Our dogs are not possessive of the beds; they always switch who is in which bed. So there isn't really a "Loki's bed" and a "Jujube's bed", but for the purposes of this story, I'll label the beds that way.

One evening, Loki was feeling particularly playful. So he went over to Jujube's bed, while she was away and dragged her bed over to his. Then he lied on his bed and proceeded to chew on hers. His bed was his bed and her bed was his chew toy!

Later on that evening, after Loki left the two beds next to each other, Jujube plopped on both beds. Her bed was her bed, and his bed was also her bed!

Shibas have such great personalities!
Posted by Vi at Thursday, April 22, 2010 No comments:

Too much dog training on the mind

The first time we gave our son a bath, he cried and screamed. The second time, he was quiet. My first thought was "Oh! Look he's so good. We should give him a treat!" Wait a minute, our son is not a dog. I've been thinking too much about dog training. And anyways, even if positive reinforcement does work on children, the only "treat" our son knows at this age is breast milk, and I'm not about to give a bath and nurse at the same time.
Posted by Vi at Tuesday, April 20, 2010 No comments:

Almost all dog owners know that dogs can't have chocolate. When we became dog owners, we looked up various lists of what dogs cannot eat. One thing that surprised us was Xylitol. What the heck is that? It is an artificial sweetener often used in chewing gum, and it's very toxic to dogs. So if you are a gum chewer, be careful with where you store your gum. Make sure your dogs can't get to it!

For your reference, click here for ASPCA's list of foods that are dangerous to dogs.
Posted by Vi at Saturday, April 17, 2010 2 comments:

Jujube was out in the backyard yesterday. I called her to come back inside. She promptly responded. She turned around from what she was doing, looked at me, and came trotting towards me. Then when she was about two feet away from the doorway (where I was standing), she looks at me squarely, and then turns around to head back out into the yard. What? She almost comes, but purposely doesn't? I'm being toyed with by a dog! This is worse than being ignored!
Posted by Vi at Tuesday, April 13, 2010 4 comments:

Shibas are notorious for not responding to the command come. Sometimes they do come, but many times they don't. It depends on what is in it for them. Both of my dogs behave this way. They only come if there is a reason for them to come to you. If what they are doing is more interesting than you, then they will gladly ignore you.

When we first got Loki, come was the first command he learned. He was great at it! But that's because come initially meant come get a treat. Come for attention and affection wasn't good enough for him. Come here, because I don't want you in that room, made no sense to him. Come for a bath was reason to run away. Come for nail clippings was reason to run and hide as if life depended on it.

Unfortunately, when dogs run away from you and hide, that makes you want them to come to you even more! In the beginning when Loki didn't come to us, we tried to bring him to us. We would go over to where he was and either pick him up or grab him by the collar. Then we'd bring him to where we wanted. In our experience, this made him very averse to being picked up and being grabbed by the collar. It didn't take long before trying to pick him up and grabbing him by the collar meant risking a bite. It has taken us years of training with positive reinforcement to get him comfortable with being picked up and being grabbed by the collar. We are still working on those issues today.

So what has worked instead? Herding has worked very well for us. We step into Loki's space (usually from behind), and this forces him to move somewhere else. By stepping into where we don't want him to go, it forces him to move in the direction that we do want him to go. So when he doesn't respond to the command come, we go to him and herd him from behind. Sometimes this requires using tools like a pillow to block off additional pathways or to shoo him out of a tight corner. Herding has always worked for us and has never caused any negative associations or behaviors.
Posted by Vi at Saturday, April 10, 2010 2 comments:

It's that time of year again! Loki is starting to shed first this season. With two dogs, you are never lucky enough to have them shed at the same time. Nope, they coordinate so as to maximize the amount of time your house is full of fur.

Loki is being furminated outdoors in the backyard. Doing this outdoors is definitely the way to go. I've heard that sometimes birds use the loose fur for their nests. 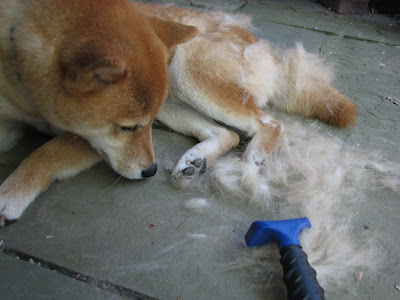 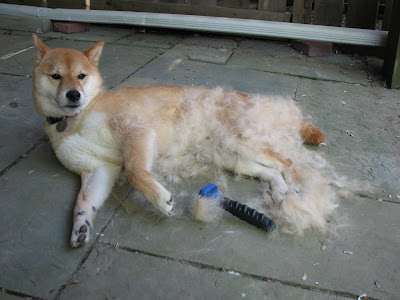 Walking around the neighborhood 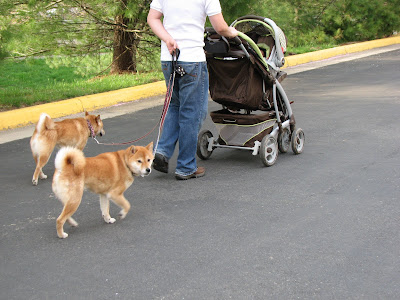 It's a good thing that the weather has been really nice. Here we are taking a stroll around the neighborhood. I was very pleasantly surprised to see that Loki had no issues with the stroller. He walks right beside it with no problems.

Two dogs and a baby is a lot, but we did manage it just fine. Each individual dog gets a little less attention with the baby in tow. Jujube takes advantage of that, as she now has more time to stealthily chew on her leash. She's so sneaky! It won't be long until we'll be needing yet another leash for her.
Posted by Vi at Monday, April 05, 2010 No comments:

I came across a shiba pictured for this USA Today article about the new emergence of dog camps. They are camp vacations for you and your dog! When I read the first paragraph, I thought this was a crazy idea for crazy dog people. But by the time I finished the article, I thought, hey this sounds like fun. Maybe I'm just becoming a crazy dog person. 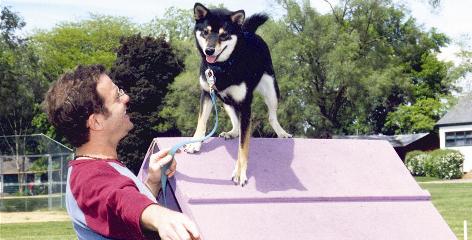