Do you suppose Loki is trying to tell us something?
I guess he doesn't like microeconomics. Apparently, he thinks the soft cover book is a chew toy. 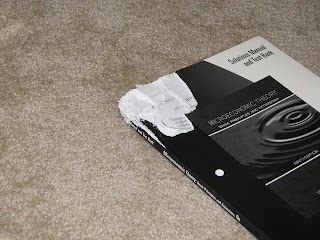 Email ThisBlogThis!Share to TwitterShare to FacebookShare to Pinterest
Labels: chewing

Loki gets 2 meals a day: breakfast & dinner. Lately, he's picked up this odd eating habit. For the first bite of each meal, he takes one piece of kibble from his bowl and eats it outside of his exercise pen. Why? I have no clue. Any ideas? Then he eats his remaining food standing over his bowl inside his exercise pen.

Changes through the year

Besides the obvious changing of size, a couple things were unexpected for us as first time puppy owners. Loki's fur went through many changes. When he was about 4 months old, he started to lose his puppy fur. I thought he had some skin disease! I even thought about bringing him to the vet. His fur looked absolutely terrible. I think puppy fur is all undercoat hair. When his adult hair came in, he started to look better. I was surprised by how "waterproof" his adult outer coat was. Drops of water would just roll off his back.

Also his butt hair has gone through various changes. Through most of the first year, his butt hair was long and looked funny. Yun always thought we should go get that part of him groomed. In the past couple months, Loki's butt hair now looks so much better. Who knew? He must have shed off those long weird looking tufts of fur. Now he has a cute butt =)

Then through maybe 6 months to a year, his body and head were a bit awkward and out of proportion, just like human teenagers. I think that even now, his body shape is still changing a bit. I hope he fills out a little more.

More recently, he's really loving belly rubs. He wasn't like that as a puppy at all. As a puppy, he didn't really like to be on his back. But these days, he can't seem to get enough of belly rubs. He twitches his hind legs in such a cute way! He now happily gets multiple belly rubs each day. What a lucky dog! We can't refuse, because he's so cute.

As a puppy he only occasionally did the Shiba 500. Maybe only a few times a month. But recently, he's taken to doing it almost daily, right after his walk. You'd think that he'd be tired right after his hour long walk, but as soon as I get his leash off, he starts his Shiba 500 around the apartment.

I remember when he was around 3 -6 months old, he didn't care too much about birds & chasing other creatures. I thought that was weird, because I always read that Shibas has a high prey drive. Apparently, I just had to wait until he grew up. Now he'll chase at nearly everything - birds, cats, leaves, cars, and other dogs.

His tastes have also changed through the year. We bought Bil-Jac Liver Treats for him when he was only 3 months old. He completely ignored it and didn't care for it at all. I figured that I shouldn't bother buying those anymore. But then a few months later, we were given those same treats during his obedience class. And he absolutely loved them!

I wonder what changes are in store for us in the next year.
Posted by Vi at Wednesday, March 19, 2008 1 comment:

One Year of Loki

Today is the anniversary of the day we welcomed Loki into our home and our family. It's easy to remember, because it's St. Patrick's Day. For better or for worse, he has forever changed our lives. I very fondly remember his first day. He behaved beautifully during the car ride home. A little lump of fur in my lap. We carried him into our apartment and put him down in the living room. He immediately knew where his home was, proceeded to his exercise pen, and plopped down on his blanket. He was so small. 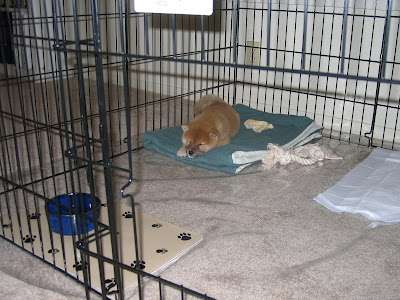 Now look at him today with the same blanket folded in quarters: 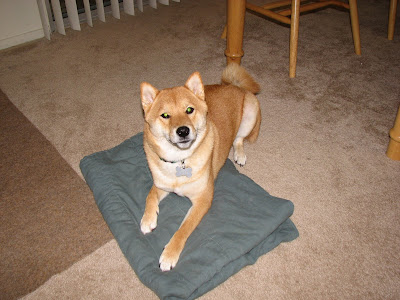 I saw a commercial on MTV for their show, Rob & Big. I've never seen the show and don't know what it's about. But this dialogue from the commercial caught my attention:

He's ignoring you right now. I've never seen a dog ignore someone.
What, he's like a child.
A dog that ignores somebody. Man, what an incredible animal.

Obviously, they have never met a Shiba. Loki ignores us all the time! He even ignores us when we come home. Everyday when Yun comes home from work, he says, "Where's my little greeter?" And if Yun is lucky, Loki will lift his head from the couch and at least acknowledge Yun's presence. Only on very rare and special occasions will Loki actually greet us at the door.

The only time Loki showers us with his attention is when food is involved. If I'm preparing dinner, Loki is sure to keep me company. If we are eating dinner, he's sure to be lying under the table. If we're snacking on the couch, he's sure to put on his cutest act. And if it's his meal time, he obeys all of his commands.
Posted by Vi at Sunday, March 16, 2008 1 comment:

Poor pup. Being used in this way for human amusement... 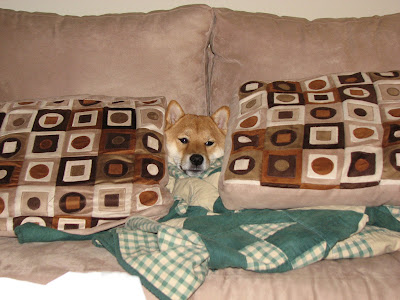 It's been over a week since Loki has gotten a proper walk. Poor little guy. Yun & I have been sick with a cough.

But I did take him to the dog park last Saturday, which Loki thoroughly enjoyed. And yesterday we gave him a bath, after which he decided that round of the Shiba 500 would be the best way to get dry.